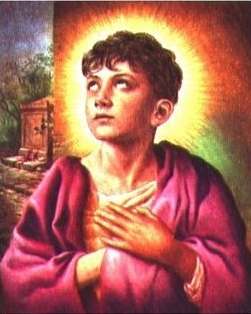 Even youth can become great saints. In child saints, we see the true dignity that every human soul is given, no matter what age, and the holiness we are all called to aspire towards, whether we be young or old. One saint of importance to Childlovers is St. Tarcisius, a youth of about twelve years of age, who lived during the bloody Roman persecutions of the Christians under Emperor Valerian in the third century.

This was a time when Christians had to hide in the catacombs beneath the cities of Rome where they secretly gathered to celebrate the Mass, lest they be found and killed. Every day a deacon would secretly be sent to the prisons to carry the Eucharist (the consecrated host, being the Body, Blood, Soul, and Divinity of our Lord) to Christians who were condemned to die. On one of these days, it is said that there was no deacon, so the young acolyte Tarcisius was sent to carry the consecrated host of our Lord to those who were condemned to die.

While on the way, he was stopped by other boys who knew him and knew that he liked to play games. When they asked him if he wanted to join their games, he said no and continued on his way, but the other boys saw that he had something with him. They soon realized that Tarcisius was a Christian and began to taunt him, trying to view the consecrated host to desecrate it. This taunting quickly turned into outright thrashing, as the other boys beat on him as he walked and soon overcame him with blows. Their beatings were so bad that another Christian had to run to the boy's aid and drive the other boys off. His broken body was carried back to the catacombs by this unknown Christian, but sadly the boy died before he made it. 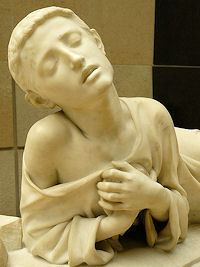 About a hundred years after his death, Pope St. Damasus called him the "boy-martyr of the Eucharist," and wrote that like the blessed martyr St. Stephen (one of the first to be stoned to death for the sake of the faith), St. Tarcisius also went to his death to protect the faith and also preferred to suffer a violent end than hand the consecrated host of our Lord over to what Pope St. Damasus called the "raging dogs."

For this great service, the twelve-year-old St. Tarcisius is honored every August 15th with a historical feast day, and is also the patron saint of altar boys (and servers). He shines as an example of the courage and heroism that all are called to emulate, even in his youth. For Childlovers, he exemplifies the true dignity that every child possesses that he would be counted worthy (as a youth and as an acolyte) to bear the consecrated host of our Lord on his person. His trial also exemplifies the absolute necessity that Childlovers treat all children not as the other boys who sought to defile this youth's way but as the good Christian who came to the boy's aid when he was in grave need.

Pray on the intercession of St. Tarcisius that all youth who serve the Lord may be kept safe from all harm and distress by the protection of God. Pray also for all children of faith that in times of persecution they may not be shaken but persevere with the courage exemplified by St. Tarcisius, the boy saint: 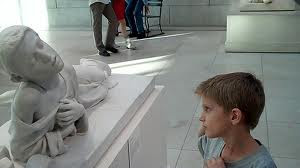 Adapted from the Prayer of Altar Servers:

O God, You have graciously called Your children to serve You upon Your altar. Grant them the graces that they need to serve You faithfully and wholeheartedly. Grant too that while serving You, they may follow the example of St. Tarcisius, who died protecting the Eucharist, and walk the same path that led him to Heaven.

St. Tarcisius, pray for all altar servers, and for all children of faith, that in time of persecution or struggle, they may not be shaken. In Jesus' name, Amen.

Grace and peace be with you.