St. Placid (the Boy Monk) and His Rescuers

God repeatedly reminds us of the dignity of every child and how we are to respect and treat children by the examples of His saints, both young and old alike. The stories told about these people instruct childlovers about how they are to regard and act around children and youths. They show us how we are never to subject them to harm, of course, but are also never to look the other way on children who are already in harm's way. Instead, we are to be their rescuers when they are troubled or in danger.

One very edifying and uplifting story comes from the early centuries of the Church (the 520s) regarding a young Benedictine monk named Placid, who was only seven-years-old when his father brought him to St. Benedict to be trained for monastic life. In short time, the boy became one of the most respected members of the order. Regarding the boy monk, Pius Parsch in his book The Church's Year of Grace (1953) writes: "Alongside the awe-inspiring figure of the holy patriarch [St. Benedict] stands little Placid, and with the innocent simplicity of a child he does much to soften the austerity emanating from the patriarch of monks."

Childlovers should see the holiness in that statement: in how children are to reflect the sage guidance of adults and adults the "innocent simplicity" of children, each with his own God-given dignity and yet each one elevating the other with it, as God intends. But that is only the beginning, for we also see from the story of St. Placid and his adult companions yet another beautiful example for how all adults, including childlovers, should regard and behave around children, especially those entrusted to our care, and especially when they are in danger or in times of trouble. This story is quoted from Pope St. Gregory in his Dialogues: 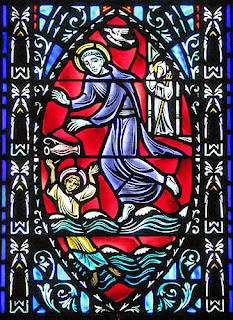 "Once while blessed Benedict was in his room, one of his monks, the boy Placid, went down to get some water. In letting the bucket fill too rapidly, he lost his balance and was pulled into the lake, where the current seized him and carried him about a stone's throw from the shore. Though inside the monastery at the time, the man of God was instantly aware of what had happened and called out to Maurus: 'Hurry, Brother Maurus! The boy who just went down for water has fallen into the lake, and the current is carrying him away!'

"What followed was remarkable indeed, and unheard of since the time of Peter the Apostle! Maurus asked for the blessing and on receiving it hurried out to fulfill his abbot's command. He kept on running even over the water till he reached the place where Placid was drifting along helplessly. Pulling him up by the hair, Maurus rushed back to shore, still under the impression that he was on dry land. It was only when he set foot on the ground that he came to himself and looking back realized that he had been running on the surface of the water. Overcome with fear and amazement at a deed he would never have thought possible, he returned to his abbot and told him what had taken place.

"The holy man would not take any personal credit for the deed but attributed it to the obedience of his disciple. Maurus on the contrary claimed that it was due entirely to his abbot's command. He could not have been responsible for the miracle himself, he said, since he had not even known he was performing it. While they were carrying on this friendly contest of humility, the question was settled by the boy who had been rescued. 'When I was being drawn out of the water,' he told them, 'I saw the abbot's cloak over my head; he is the one I thought was bringing me to shore.'"*

The heroic and ultimately humble actions of these good men on behalf of the life of this boy seem morally obligatory to us now, but let's remember that in ancient times, the lives of children were generally considered secondary, or there normally would've been no special emphasis on saving this boy in the outside culture of the day, especially since he was not the direct son of his rescuers. His rescuers therefore had no absolute necessity (from the world) to save his life, but in doing exactly that (by the graces of God), they show us that it has always been God's will that we see the dignity in every human life, children included, and that we should not only avoid harming them, but also rescue them when they are in harm's way.

Childlovers who never put children in harm's way or ignore children in need of rescue are no doubt a blessing from God to God's children, whether they are recognized by others for their heroic charity or not. By contrast, Childlovers who put children in harm's way or even just approve of children being put into harm's way (in child pornography for instance) are no doubt an abomination to God. The role of the Christian Childlover is always to oppose anything that harms a child directly or indirectly or even just approves of that which does, because those who even just "look the other way" on children in peril, or gratify themselves from it, are not following the Godly and heroic example of St. Maurus and St. Benedict in rescuing little St. Placid.

Grace and peace be to you.

*(From The Life and Miracles of St. Benedict by Pope Gregory the Great, translated by Odo Zimmermann, O.S.B. and Benedict Avery, O.S.B.)