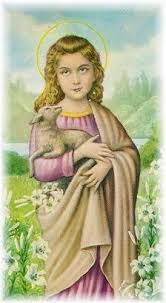 The reason we have a special fondness for children and why we don't want them to come to harm is because we see in them the value of a human life in all its true preciousness and meekness. We see how we would do well to extend this insight to others, because that is how God sees all of us. St. Agnes was only twelve (or thirteen) when she was martyred for her devotion to Christ. Her short and yet fruitful life was lived out during the persecution of Christians under the reign of the Roman emperor Diocletian in the early 4th century. She was said to be very beautiful, but she maintained her purity to the end, and so it is fitting that her name is Agnes (meaning "the pure one"). Along with being a martyr, she is also the patron saint of girls and rape victims.

Legend has it that she was walking home from school when she was approached by a man named Symphronius, who happened to be the son of the city prefect. He was aroused by her beauty and tried to win her over with gifts to seduce her, but she rebuked him. She did not consent to his advances and strongly asserted that it was because she was already "betrothed to Christ." She reportedly told him something to the effect of: "With His ring my Lord Jesus Christ has betrothed me, and He has adorned me with the bridal crown" (3. Ant., Lauds).

The man didn't respect her request and became very indignant. He went home to his father and reported her for being a Christian (an offense punishable by death in those days). Seeing her youth and her beauty, they tried to sway her into incensing a pagan sacrifice and to renounce Christ and marry the man, and she adamantly refused, saying: "At my side I have a protector of my body, an angel of the Lord" (2. Ant., Lauds). It was said that upon entering the prefect's house, a light enveloped her such that nobody could look at her and the pagan priests noticed this and had her tried for sorcery. A judge sentenced her to death at the stake. They lit the fire around her to burn her, but it didn't kill her, and she reportedly gave thanks to God: "O You, the almighty One, who must be adored, worshipped, feared - I praise You because through Your only begotten Son I have escaped the threats of wicked men and have walked through the filth of sin with feet unsullied. I extol You with my lips, and I desire You with all my heart and strength." Afterward, the prefect ordered her beheaded (or stabbed to death).

St. Ambrose later wrote on St. Agnes's martyrdom in the 4th century very eloquently and fully grasping all her death has to teach us about the value of personal purity and the dignity of children: 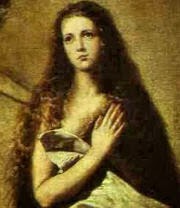 "The cruelty that did not spare her youth shows all the more clearly the power of faith in finding one so young to bear it witness.

"There was little or no room in that small body for a wound. Though she could scarcely receive the blow, she could rise superior to it. Girls of her age cannot bear even their parents' frowns and, pricked by a needle, weep as for a serious wound. Yet she shows no fear of the blood-stained hands of her executioners. ... She is too young to know of death, yet is ready to face it. ... She puts her neck and hands in iron chains, but no chain can hold fast her tiny limbs.

"A new kind of martyrdom! Too young to be punished, yet old enough for a martyr's crown... she shows herself a master despite the handicap of youth. ... What menaces there were from the executioner, to frighten her; what promises made, to win her over; what influential people desired her in marriage! She answered: "To hope that any other will please me does wrong to my Spouse I will be his who first chose me for himself. Executioner, why do you delay? If eyes that I do not want can desire this body, then let it perish." She stood still, she prayed, she offered her neck.

"You could see fear in the eyes of the executioner, as if he were the one condemned; his right hand trembled, his face grew pale as he saw the girl's perile, while she had no fear for herself. One victim, but a twin martyrdom... Agnes preserved her virginity, and gained a martyr's crown." *

It was said that her youth and her beauty in the midst of such torture caused all the onlookers terrible grief, and that even her persecutors trembled and broke down in tears over what they had done to her. Let us pray for children, keeping in mind that 1 in 4 girls and 1 in 6 boys are sexually abused before they turn 18*. As Childlovers, we do well to pray for children who are abused and remind ourselves never to become like the man in this story.

St. Agnes, patron saint of children, watch over the children of the world; keep them safe from harm; be with them in their hour of need; and always pray for them.

As a childlover, say a prayer for girls (and all the children of God), reminding yourself of the words of our Lord: "If anyone causes one of these little ones--those who believe in me--to stumble, it would be better for them if a large millstone were hung around their neck and they were thrown into the sea" (Mark 9:42). May we truly grasp the meaning of these words.