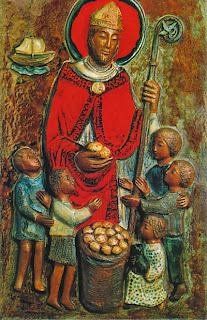 St. Nicholas is one of the most celebrated saints in the western world, and though he would've never desired such recognition to overwhelm the birth of Christ during the holiday season, the celebration of his legendary generosity and his love for children has become the symbol of Christmas in the modern world and is still beloved by children and adults alike. Sometimes childlovers can feel like Santa Claus, giving what we can for children without any expectation of reimbursement, and sometimes even to very demanding young friends(!), but charity is what we should model at all times, especially to children, as is St. Nicholas a good model for us. Today is his feast day.

The real St. Nicholas, apart from his fame as "Santa Claus," was the bishop of Myra in the 4th century. He came from a wealthy family, the son of the archbishop of Myra, but he held the poor in his heart and was persecuted under the Roman emperor Diocletian. He was released by the mercies of God and the Christian emperor Constantine and became a bishop. He was always known for his generosity and his concern for the poor, and especially for upholding the dignity of children.

It is said that once there was a father who had lost his fortune and became destitute, and realizing he could no longer support his three young daughters, contemplated selling them into prostitution in order to make some money. St. Nicholas heard this man's intentions and instead of merely condemning the man, decided to come by night and secretly throw three small bags of gold through the window anonymously, thus allowing the man to avoid committing that horrible sin of child prostitution and defiling his own daughters. He became known for his giving, especially to the poor and to children. Although many children flock to his image and make out their lists of wants and needs, St. Nicholas the man lives on teaching everyone, including children, the virtues of generosity, kindness, helping the poor, and perseverance in hardship (he was imprisoned after all!).

For childlovers, the saint showed a compassion for children in jeopardy that is more than admirable and still more than needed in this world, and that is what Christian Childlove is all about. Often a childlover's good works for children go unnoticed and unappreciated, but St. Nicholas reminds us that charity is good work always and everywhere, and especially if we have it in our ability and power to go out and do something that will benefit our fellow younger friends. If you know any children, take time to consider whether you have ever been like the father in the story of St. Nicholas, and make the firm decision right now to be more like the man we celebrate today, who in giving what he could give to the poor and to the most vulnerable, was himself imitating our Blessed Lord, who gave us all the supreme gift of Himself, and who's birth and second advent we anticipate in this holy season of Advent.

St. Nicholas, glorious Confessor of Christ, assist us in thy loving kindness. Grant by your intercession that children who are suffering abuse, maltreatment, or neglect, may experience the hope of Christ in the charity of another, through Christ our Lord. Amen.

On this day, a boy is elected from the parish to wear the bishop's vestments, wearing the mitre (the hat) and crozier (the shepherd staff) and then to "preside" at the mass (even getting to sit in the bishop's seat!) with the blessing of the bishop, along with his friends dressed as priests and praying for him. Traditionally this is done each day for him until the Feast of the Holy Innocents on December 28th. What a way to inspire the spark of a vocation in a youth!

Grace and peace be to you.