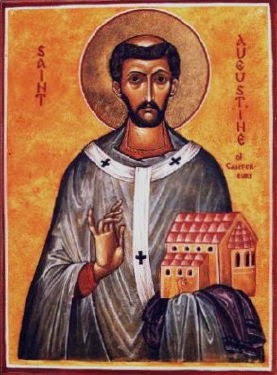 Today in the Church we memorialize one of the most influential thinkers in the history of the world and a Saint whose battles with sin ought to be especially present to childlovers who also battle. His life gives us an example of overcoming the odds within ourselves by the grace of God.

St. Augustine is known as the "Great Sinner," for he lead half his life in 4th century Algeria in the shadow of his own vanities and despair, lusts, drunkenness and excess, self-centeredness, thirst for power and the unresolved issues against his parents (mostly his father, whom he ended up following into a life of similar dissipation anyways). He was "restless," according to his own later description, always looking for happiness in all the wrong places, seeking and never finding. This "great sinner," not unlike each of us, was a creature of pleasure-seeking and habit who sought a rhetorical kind of self-advancement over truth and often faced the consequences of such. He was even a part of the Manichean religion at one point, a very dualistic path that emphasizes the "evil" of the created world and the passions. He was indeed a very divided, despairing, and ultimately fruitless man in his youth. He even famously wrote on how his prayer life was something along the lines of: "God, grant me chastity and continence, but not yet." (Confessions)

So why is he now among the greatest minds who ever lived? Why do we reverence such a man? How much different was he than any of us? The point is he wasn't. In short, he came to know God, came to confess Christ as savior, became a priest, founded an order of monks, became the bishop of Hippo, wrote a lot of influential books and died defending his order and fellow believers from vandals. He has since been canonized and declared a Doctor of the Church for his life and writings. These are all very impressive things, but the greatest gift this man gave out of his own life was completely God-given. It was the eternal wisdom of God.

Very much like ourselves as childlovers, St. Augustine struggled with bad habits, but came to understand by the grace of God in his life that simply struggling with sin is not what makes us, for all struggle under various sins. The difference between a mere sinner, or even a "great one," and a saint is that a mere sinner is ultimately hurt by his sin while a saint overcomes his sin by the grace of God. But how does this happen? How do we overcome our bad habits? St. Augustine wrote much of his own life in the long prayer to God that is his book Confessions, saying that: "Because my will was perverse, it changed to lust, and lust yielded to become habit, and habit unrestricted became necessity. Thus I came to understand how the flesh lusts against the spirit, and the spirit against the flesh." (Confessions)

Taking the cue from the writings of St. Paul (Galatians 5:17), automatically is set up here for us two different "wills," the perverse and the holy. The perverse will encounters lust, for example, feels its feelings, consents to them, acts on them, and feels the consequences in some way (and death results, ultimately). A holy will encounters the same lust, feels the same feelings, doesn't consent to them, doesn't fear them, but uses them for the glory of God instead, and then feels the blessings that result after time and perseverance, as St. Paul writes: "Not only so, but we also glory in our sufferings, because we know that suffering produces perseverance; perseverance, character; and character, hope" (Romans 5:4). The perverse will can not become holy on its own (how can it?) and the holy will likewise can not become perverse, for the perverse will pursues lust exclusively for its own sake, which produces sin (and death, a "wage of sin"), and the holy will makes use of lust for the glory of God, which produces righteousness (a gift of God... Romans 6:23).

But there is no battle between these two wills over the destiny of our souls that we are merely caught up in and can't do anything about, only choices and how we respond to the things we feel and see. We need not fear lust, nor pursue any gift or blessing, but always seek the will of God in all things. Just like the "desire" and "intention" to pray does not equate with prayer, but only the consent and action of prayer does, the mere "desire" and "intention" toward lust does NOT equate with "sin," but only the consent and action of lust, which is born in the "heart" (as Christ spoke in Matthew 5:27-28). Therefore, the mere feeling of "lust" is like all things a neutral feeling and NOT inherently "evil" (as the Manicheans believed), because a perverse will will use it as an opportunity to sin (as we all do at times), but a holy will will use it as an opportunity to pray and practice charity, which is righteousness. How can that which can be used to provoke righteousness be inherently evil? With a holy will, it can't. This St. Augustine came to understand.

But how do we make the leap between the "downward" spiral (or bad habit) of a perverse will occasioning sin encouraging a perverse will...etc, to the "upward" spiral (or good habit) of a holy will occasioning prayer and charity encouraging a holy will...etc.? And especially, how can it be done if the one can never lead to the other by natural, logical, or human means? For that we need super-natural means. For that we need Jesus Christ. Not just His Teaching, but Jesus Christ Himself. But how is this leap accomplished? Paradoxically, it is occasioned in the very experience of imperfection itself, the one thing common to the experience of every will whether "perverse" or "holy." The "lust desire" on its own, like the inclination to sin itself, is the ONLY common variable, the only common experience between the upward (holy) cycle and the downward (perverse or "vicious") cycle. So just as this point is where a holy will can become perverse by inclination (temptation) and lead to sin and the downward cycle, it is also the point at which a perverse will can become holy by inclination (God Himself) and lead to righteousness and the upward cycle. 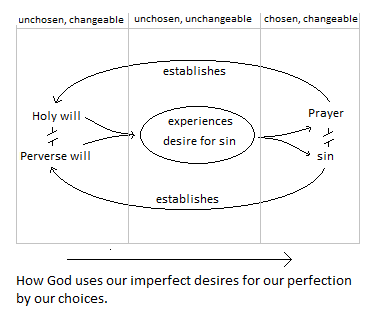 "Party time" pleasures the body immediately but is ultimately full of consequences that end up ensnaring and enslaving us or at least making us unfruitful both immediately and in the long run (by the creation of bad habits). "Prayer time" often deprives the body but causes fruitfulness and avoids the consequences by establishing good habits wrought in labor and devotion and the love of God and neighbor.

The good news St. Augustine teaches in his writings is that of Christ, namely that: "In this world you will have trouble. But take heart! I have overcome the world" (John 16:33). This is especially emphasized in Augustine's book City of God. His great contribution to the history of human thought is that ultimately the choices before us are a gift from God and that they influence our will, which in turn influences our choices. In the moment we feel lust or any fleshly desire, no matter how intense (and often because of its intensity!), both wills become available to us and the action is what is chosen and the result is what is in the judgement of God. Our experience of any inclination to sin and how our choices affect us are unchosen and unchangeable, but our will and our action is always chosen and changeable.

Let us echo the words of Augustine in our prayers: "[Lord] You have made us for Yourself, and our hearts are restless until they can find rest in You" (Confessions). Remember, lust and desire for sin is an opportunity permitted by God for you to choose righteousness (like He permitted the "fruit of knowledge" to be in the garden so man could have a choice), not a thing to be feared or to run away from. So use it for good! Desire it! And thus, the life of St. Augustine, and our own lives, bring to mind the words of the teacher in Ecclesiastes, the eternal wisdom of God:

"However many years anyone may live, let them enjoy them all. But let them remember the days of darkness, for there will be many. Everything to come is meaningless. You who are young, be happy while you are young, and let your heart give you joy in the days of your youth. Follow the ways of your heart and whatever your eyes see, but know that for all these things God will bring you into judgment. So then, banish anxiety from your heart and cast off the troubles of your body, for youth and vigor are meaningless. Remember your Creator in the days of your youth before the days of trouble come and the years approach when you will say, "I find no pleasure in them" (Ecclesiastes 11:8-10, 12:1).

St. Augustine, pray for us.